Ontario’s electricity prices have been soaring ever since the province’s 2009 introduction of its Green Energy Act, resulting in a long-term decline in demand across the province.

Yet demand over the last decade has fallen dramatically – having dropped from 157 terawatt hours (TWh) in 2005 to 141 in 2013, or about 11 percent. Demand dropped dramatically through the 2008-09 financial crisis and has yet to return to its pre-crisis level. The chart below highlights the divergence in the price of energy compared to demand. 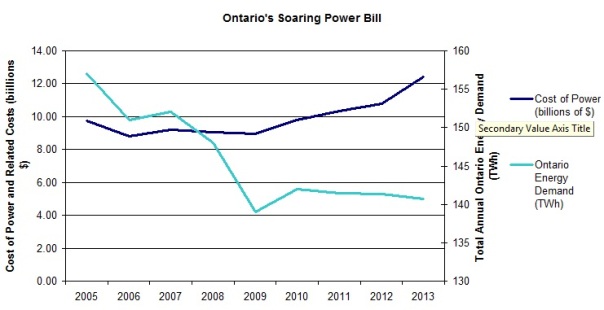 Worse still for Ontario’s ratepayers is that those cost increases are expected to continue over the next 3 years, with Energy Minister Bob Chiarelli recently warning ratepayers that their bills will increase by 50% over that time.

The biggest reason for the increase is renewable energy (wind, solar and biogas), which now accounts for about 6% of all supply, but is expected to more than double in the coming years. The cost of generation from those new sources is significantly more than traditional forms of generation (hydro, nuclear and coal).

According to the Ontario Power Authority, one megawatt hour (MWh) of energy from nuclear and hydro costs $59 and $43, respectively, while that same amount of energy from solar and wind costs $504 and $108 respectively. As those new renewable generators connect to the grid, those costs will be passed on to ratepayers.

The effects of these expensive forms of energy and the resulting price increases are already being felt in the province, with the chief executive officer of Magna – the global auto parts maker that was founded in Ontario – recently telling its shareholders that he was “worried” about high electricity prices in the province and said the company had no intention to open any new plants in Ontario. The province has lost 119,000 manufacturing jobs since the end of 2008 and 287,000 jobs since 2005, according to Statistics Canada.

Brady Yauch is an economist and Executive Director of the Consumer Policy Institute. Email: bradyyauch@consumerpolicyinstitute.org.

Megaprojects Bankrupt Utilities and Leave Regulators in the Dark

Power Exports at What Cost?

Getting Zapped: ON electricity prices increasing faster than anywhere else

CPI’s Report on the DRL